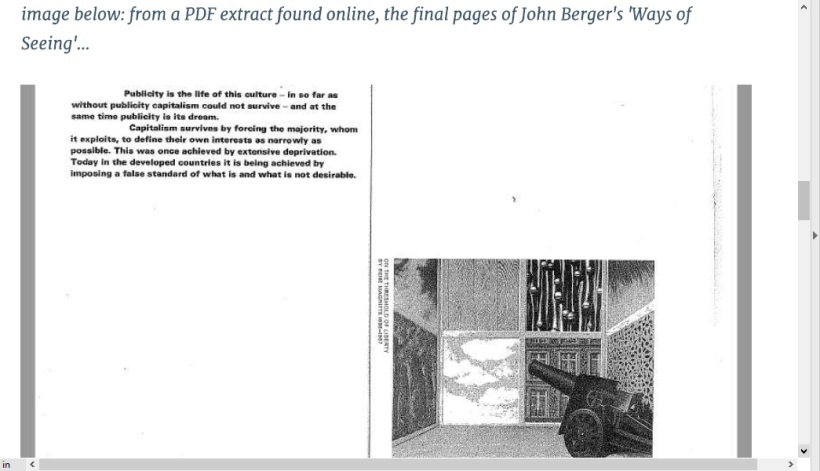 There’s something in this page shown above that is very resonant of work seen during British Art Show7 in 2011, particularly those shown at Nottingham Castle. So maybe one day I’ll tie up some loose threads and get something down. For now, this post is a re-working of a draft from January that was almost lost to the ether in some kind of failing / crash.

Why ‘Ways of Seeing’?

[Originally, I drafted this writing for an ‘Authors who made history’ post for BW so this fact was pivotal:]

For many years now, John Berger’s book, ‘Ways of Seeing’, has been on the compulsory reading list of almost every British art and design course. I’d either somehow missed that fact back in my art student daze, or glanced it over and dismissed it out of hand. During a W.E.A. class a few years ago now (how time flies!) I spent a while browsing this book in the gallery reading room. I still couldn’t quite see WHY is it such an important text in relation to appreciating or creating art? Sadly, I remained completely oblivious to his other works as a poet, writer and artist until researching for this post following news of his death.

I appreciated it- ‘Ways of Seeing’ –  better, from a distance, via some limited preview chapters in an online PDF. The book was developed following the BBC’s four-part television series presented by John Berger and credited with changing the way the nation received, or thought about, art and art history.  I had never even heard mention of the television programme until I saw it was the basis of the book. Apparently the programme may be available to purchase as a video download, although even so these days UK viewers will still need a TV licence. I don’t know if that means such products are with-held from consumers elsewhere in the world.

It’s said to be based on and influenced by Walter Benjamin’s essay ‘The Work of Art in the Age of Mechanical Reproduction‘ [wikipedia link].

“The most uplifting thing about Ways of Seeing is Berger’s optimism about the age of the mass-circulating reproduced image, which, back in 1972, meant images in newspapers and magazines, on advertising hoardings and television. These days of course it also means on Facebook, Instagram and the internet at large. …”

Here’s a small excerpt from page 150 of Ways of Seeing, where, in relation to publicity, Berger tells us:

After serving two years with the army from 1944 to 1946, assumedly compulsory conscription, in the late 1940s Berger trained as an artist at the Chelsea School of Art and the London School of Art; he exhibited in London and taught drawing until 1955. His first novel, ‘A Painter of Our Time’ was published in 1958 and his first published collection of essays, ‘Permanent Red’, in 1960. Among other awards in his lifetime, he is probably best known for controversially donating half his Booker Prize fund to the Black Panther Party after his novel ‘G’ was selected for the prize in 1972.

“For me there were too many political urgencies to spend my life painting. Most urgent was the threat of nuclear war – the risk of course came from Washington, not Moscow.”

John Berger quoted in an article by Michael Glover published at the Independent on 3rd January, 2017.

There are lots of articles about John Berger to be found online and the British Library archive for John Berger and the wikipedia entry for his bio and list of works could keep me (or you) .out of mischief for an interesting while enough.

I haven’t yet bought a copy of ‘Ways of Seeing’, I’m still thinking about it, maybe until one shows up at a knock-down price I can’t refuse. I did however buy Berger’s 2016 book, ‘Confabulations'[ISBN:9780141984957], published in October by Penguin shortly before Berger turned 90 years of age, sadly not in time to help the old man out with some return. I might well journey in exploration of those delightful writings, and more, another time.

A final quote to close, from the first page of the text in John Berger’s Ways of Seeing, at page 7:

“The relation between what we see and what we know is never settled. Each evening we see the sun set. We know that the earth is turning away from it. Yet the knowledge, the explanation, never quite fits the sight.” [John Berger, Ways of Seeing]

One thought on “#Author-story ~ Contemporary Writer #3”

Need a prompt? Comment if you will...Thx Cancel reply

This site uses Akismet to reduce spam. Learn how your comment data is processed.